WW Trust would like to thank all those who made this last weekend such a special one to mark the 125th anniversary of the formation of Wycombe Wanderers Football Club.

Whilst on Saturday things didn’t go quite to plan on the pitch against Wimbledon, resulting in Gary Waddock being relieved of his duties as Manager, off the field was a great success. 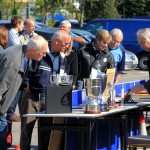 Of great interest to many fans was the display of Club memorabilia and this was extremely well received especially as many of these items normally reside in the Boardroom, away from view.

It may well be that we can have more items on display, visible to all, on match days. This has also given us an added incentive to ensure that a planned exhibition for the Wycombe Museum is successful.

Thanks to Trust Board Members, Garry, Keith, Reg, Tim and David Cook for putting this together and manning the display.

On Monday night, the actual anniversary date, the Vere Suite was packed out with fans there to meet and greet the best Manager that Wycombe has had (to date) in Martin O’Neill.

First the audience was treated to a fascinating history lesson by Alan Hutchinson showing his WW Early Days video about how the Club was formed in 1887 and progressed in those very early years.

But the star of the evening was undoubtedly the ‘genial Irishman’ who, guided by Hutch, went through his time at the Club which had so many highlights and amusing moments (don’t mention Ruth!). Also present were players of Martin’s era in Paul Hyde, Keith Ryan, Steve Brown, Terry Evans, Dave Carroll, as well as Matt Bloomfield from today’s team plus Tony “Bodger” Horseman and John Maskell from the earlier days.

Martin did admit later that he may not have come back again had it not been for the efforts of both ‘Hutch’ and John Taylor of the Ex-Players Association to who we should all be grateful. This was the first  joint production between the Trust and the EPA but one described as being the “most successful and entertaining evening in the history of WWFC”.

So a big thank you to those already named along with John Bignell and Tony Crow plus all the Club staff who made it such a successful evening. The food that was served up earlier was well received, reasonably priced and of good quality. It is hope that we can put on more events before too long , once again at a reasonable price, to attract all fans.

Pictures above are courtesy of Club Photographer Paul Dennis.