Part of the following piece first appeared in the Grimsby matchday programme ‘Parklife’ and this will also be emailed to all Trust Members.

WWT and WWFC owned by our fans, run for our fans

Meet your Trust Board:

Lawrie Read was elected to the Trust Board at the AGM in November 2016.

“I’ve been a supporter of Wycombe Wanderers since the day we entered the Football League and have been a season ticket holder for the past 13 years. I joined the Trust four years ago and volunteered to serve on the Trust’s memorabilia committee a couple of years ago.

I have lived in South Bucks for most of my life and I am well aware of the history and traditions of this football club.

I have recently been a Board member and company Director of UK Screen, the trade body responsible for companies offering Production Services to the UK’s film and television industries and I was President of the BKSTS (the British Film & Television Society) for four years. I have also been an International Governor of the American Society of Motion Picture & Television Engineers. I believe that with my business background, having successfully run my own Company from 2007-2015, I am suitably qualified to help make decisions that are in the best interests of the Trust and Wycombe Wanderers football club.”

This was launched in March 2015 and its key aims were:

The Share Scheme now has commitments up to the end of 2019/20 totalling £744,000. It has injected capital into the Club and substantially improved its profitability. Investment has gone into Adams Park to purchase several essential items as well as some Stadium improvements that can be seen. Read here for more on that. There are still many things on the “wish list” and funds from our members are providing things the Club otherwise would not be able to afford.

Trust Members still paying monthly amounts into the Share Scheme will be entitled to their next share certificate/tax relief claim form in April. Due to the number to be issued and to save on postage costs, could those people please collect an envelope from the Trust table in the Caledonian Suite prior to the final Home game vs Stevenage on Saturday 5th May.

Whilst the injection of funds into the Club has been a huge help, we are not out of the woods yet and fans can still join the Share Scheme either through one off donations or through regular payments. You can do this on the Trust website through this link https://www.wycombewandererstrust.com/share-offer  or for any more information send an email to shares@wycombewandererstrust.com 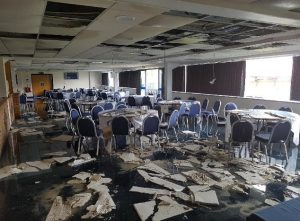 On 3rd of March a pipe burst in Kiosk 7 on the concourse in the Frank Adams Stand and was not discovered till Monday morning, by which time it had caused huge damage to many areas.

This photo was taken just after the leak was discovered. The concourse was flooded and the Woodlands, Executive Suite, 6 Executive boxes, the kitchen, bar and toilets had been flooded to a depth of 2 “.

There has been water damage to fabric of the building, damage to catering equipment, to furniture and fittings, to floors, ceilings and many other areas.

One of the key objectives in this type of situation is to detail all the damage and through working with the loss adjuster appointed by the insurers, agree costs for repair and reparation. This has been led for the Trust by John Derben who is a Trust Director. His long experience in the building trade has made sure that we have a capable pair of hands pulling all the activity together.

Michael Davies and his Club team responded superbly to the crisis, putting in a huge number of hours, over and above all normal expectations. It will be weeks yet before things are back to normal and the final cost, which will be funded by our insurers, could be in the region of £200,000. The completion date is looking like end of April 2018, but this is just an estimate.

Trust ownership has given the Club a level of stability that had been lacking previously. The Trust passionately believes in the preservation of the heritage and history of our Club and seeks to share it with the wider community. The Trust is a volunteer led, democratic organisation which seeks to foster a real sense of ownership amongst the Club’s supporters. The Trust is an ever-changing entity, not constrained by the whims of individual Directors or owners.  All Trust members are equal and anyone of them can be elected or co-opted onto the Trust Board and, from there, onto the Club Board. The Trust’s annual subscription of £10 per annum makes Trust membership accessible to all. If you are not yet a member of the Trust, or if your membership has lapsed, now is a good time to join. Contact John Bignall at johnbig@wycomebewandererstrust.com 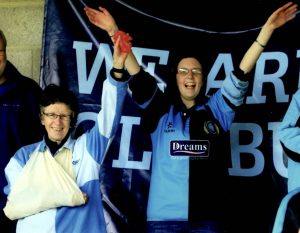 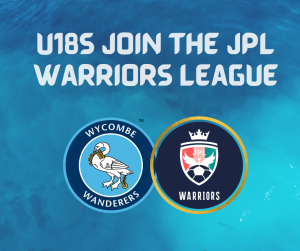